BUNNY is a drama about Buckley, a sensitive and troubled young man with long furry rabbit ears – a living part of him since experiencing childhood trauma. Buckley longs to escape the confines of the remote, run-down caravan site where he assists his alcoholic grandfather in caretaking duties. With only each other for support, the role of dependent alternates from one to the other. The onsite community plays along with Buckley’s delusion in an act of kindness and acceptance. A group of young outsiders are less tolerant. They challenge Buckley and his way of life, culminating in a violent altercation. Buckley is forced to confront his delusional worldview and risks losing the final bond to his dead mother. 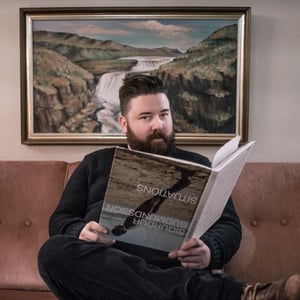 “This story explores themes of childhood trauma, its effect on adult life, mental health, loneliness, and the necessity of familial support. It’s also a story about me, and my family.

My parents split when I was two years old and, like Buckley, my grandparents raised me. Mental health issues have plagued my family all of my life. From anxiety and depression to alcoholism to drug and gambling addiction.

My grandparents live on a caravan site in Fife. They own a residential chalet. Before that we used to spend every weekend in a static caravan. I feel like I’ve spent my life researching this film. The setting of the caravan site allows me to explore a close-knit community that exists in isolation, making the outsiders even more of a threat when they come speeding into Buckley’s world.

This is a study in mental illness. Kindness doesn’t always help. I’ve watched my grandparents spend half of their life-savings bailing me out of trouble, and the other half bailing my Dad out. In the film the community play into Buckley’s delusion. Their acceptance of him is a kindness, ironically though it enables his delusion and halts any potential progress.

I have researched various disorders including Clinical Lycanthropy, Species dysphoria and Boanthropy. Delusional Disorder with hints of Schizoid Personality Disorder (SPD) more accurately reflect Buckley’s symptoms, though this will never be specified in the film. I believe it’s more apt that Buckley is one of many people living with an undiagnosed or untreated mental illness.

Themes of loneliness and longing are explored; absent parents and spouses. Buckley longs for his mother to be in his life, Pete for his wife. There is a curiosity in Buckley and desire for something more in life. This is mirrored in Erin who is also unhappy with her lot in life at such a young age. She represents the idea of something more being out there beyond the perimeter, and also the young love that Buckley was never able to experience.

Aside from the obvious antagonistic force of the outsiders there is a central tension between Buckley and Pete – one wants to speak but feels he can’t, the other represses everything. Both of them need to speak but communication has broken down. The role of dependent alternates from one to the other.

His grandfather sewing the ear back together in the end is an example of him enabling Buckley’s delusion, and in some ways sharing in it. Pete agonises over whether to put the ears back on Buckley. On the one hand he wants to protect Buckley from the outside world. On the other he doesn’t want him to leave. He’s aware this probably isn’t the road to recovery and long term healing. In a self-serving act of kindness he takes away Buckley’s immediate pain, but further enables his delusion. He needs Buckley around as much as Buckley needs him.”