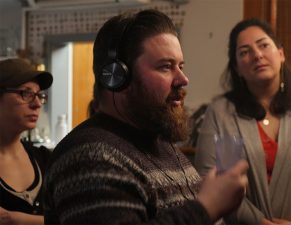 With Mental Health Awareness Week drawing to a close, my producer asked me to write something to talk about my new short film Bunny and its themes of family, loss and undiagnosed mental illness.

If I’m honest I’m struggling. What is informative and what is an over-share? How do I convince you I’m writing this to genuinely promote mental health awareness, and not as a shameless act of self promotion for the film we’re just finishing?

This year’s focus is on stress. Ironically I’ve had a pretty stressful 12 months writing and making our short – but that’s a stress that is manageable, that I can handle, and with the satisfaction of a piece of work we’re proud of at the end. It’s not the same as the stress, anxiety and depression I’ve suffered in my personal life, which are perpetually unresolved. I’ve been coping with these issues for more than 10 years; some times have been worse than others, most of the time I’m good. It’s in me though, whatever ‘it’ is. And it’s always there.

My family has been affected by mental health issues for as long as I can remember. I refer to them as one unit because I’m not comfortable discussing individual personal issues that aren’t my own, but also because we are all connected, and if one person suffers it has an impact on all. That’s my experience of mental illness – its impact is broader than the individual. Many family members have been on antidepressants over the years but that didn’t work for me. I mean they worked, they did what they were supposed to, but they leveled me out in a way I didn’t like. When I came off them after a year my partner at the time said she felt like she finally had her boyfriend back.

I’ve struggled with ups and downs in the years since – and received treatment in Reverse Therapy which helped clear my cluttered mind and refocus me. I’ve been embarrassed to say this publicly – as an introvert I’m embarrassed to say anything publicly – for concerns of the surrounding stigma, and the judgment attached. However, spreading awareness is the first step towards a solution, and that starts with admitting it to ourselves. I live with mental illness. And I know I’m not alone in that.

This month we lost Scott Hutchison of Frightened Rabbit to a suicide sign-posted in his body of work. Scott talked openly about mental health issues and suffering from anxiety and depression. He was an inspiration and hero to many. Though he seemed in control of things he was ultimately consumed by his illness. It never goes away.

I didn’t know Scott personally – I have friends that did – but his music got me through a bad break up, a toxic relationship, and out the other side to the happier place I’m now in. Losing him created a hole that can’t be filled and it’s heartening to see the wave of positivity and support as people mourn the loss of an everyday hero.

My film Bunny delves into themes of undiagnosed mental illness, loss, and family. It’s autobiographical without being an autobiography. It’s deeply rooted in personal experience and relationships, though somewhat removed from the real life situations.

Bunny is a drama about Buckley, a sensitive and troubled young man with long furry rabbit ears. He believes them to be a living part of him as a result of childhood trauma. He longs to escape the confines of the remote, run-down caravan site where he assists his alcoholic grandfather in caretaking duties. With only each other for support, the role of dependent alternates from one to the other. The onsite community plays along with Buckley’s delusion in an act of kindness and acceptance. A group of young outsiders are less tolerant. They challenge Buckley and his way of life, culminating in a violent altercation. Buckley is forced to confront his delusional worldview and risks losing the final bond to his dead mother.

I guess it’s a form of art therapy to tell these stories. This film is about me, but it’s also about many others. I wrote it and directed it but many other people had an impact on the telling of it – film is a collaborative medium and a part of this film belongs to every cast and crew member who worked on it and made it what it is. The subject is personal but the themes are universal. It doesn’t offer any easy answers as I feel that would be an unrealistic and somewhat dangerous representation of mental illness. I do hope that it has an emotional impact, provokes discussion and helps spread awareness in some way.